Hi, I’m Brandon and I grew up in Worland, WY where I graduated in 2003. After graduating High School I went on and got my Bachelor's Degree in Kinesiology and Health Promotion-Athletic Training from the University of Wyoming in 2008. Then I moved on to my Master's Degree which was completed in 2010 from the University of Nebraska-Lincoln in Educational Administration.

I have lived in Thermopolis since 2010 and have occupied many roles in and out of the district. I am married to Catelyn Deromedi (Shue) and have been since summer 2014. My family currently lives in Worland where I have one brother and one sister.

I have many hobbies and interests that are all centered around sports and physical activity. I played football, basketball, and track in high school. Since then I am very involved in the sport of exercise. I also love golf, hunting, hiking, camping, and almost anything else outdoors. I am also involved in recreation within Hot Springs County including volleyball, basketball, and softball. Thanks for stopping by! 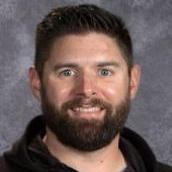